When Our Blessed Lord says, “Ask,” He encourages, urges, invites and even commands you to pray. When Our Lord Jesus says, “And you shall receive,” He assures you that your prayer will not be futile. More than that, He gives His Word that what you pray will be heard and acted upon. And when Christ the Lord promises “that your joy may be full,” He tells you the benefit of prayer.

Set your mind, then, on things above, not on things on the earth. For the benefits Our Lord gives are not earthly but heavenly. And the joy He promises is not the self-gratifying joy that so quickly fades. The joy Our Lord promises is not only more enduring, but fuller, richer and more abundant. “That joy is so great that nothing further needs to be added to it.” None of this world’s joy can hold a candle to it. And all other joy is nothing compared to the joy Our Lord promises and gives.

So pray not for what you desire, but pray that you may desire the things of God. Pray not for faith, but pray that you may believe, know and have the firm conviction that no matter what happens, Our Lord cares for you, provides for you, does not give up on you, fights for you, and sees you through all things. And pray not to have a better life, but pray for the will, the strength and the resolve to live the life you have been given to live in Baptism. And pray these things in Jesus’ Name because, by His Spirit, He lives and dwells and abides in you; and, by the same Spirit, He has granted you the gift of you living, dwelling and abiding in Him.

So what do we pray for? Whatever Our Lord promises. And what do we ask? That our joy may be full. And so we pray to Our Father through our Jesus to create in us a clean heart, and renew a right spirit within us. We beg Him to cast us not away from His presence, and take not His Holy Spirit from us. And we plead with Him to restore unto us the joy of our salvation, and uphold us with His generous Spirit. For then we have said what He says, and asked for what He gives. And then our joy will be full.

An excerpt from the Rogation Sunday sermon preached 5.21.06 at Zion Evangelical-Lutheran Church of Detroit.

A Little About St Maximos the Confessor 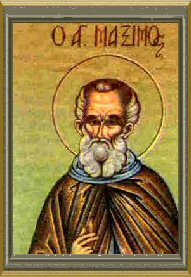 One of the classes I'm taking for my D.Min. is an elective focusing on all the translated writings of St Maximos the Confessor. Dr William C Weinrich of Concordia Theological Seminary is teaching this class, which also includes one of my classmates from the D.Min. group. To assist me in working through one of these texts, I'll be teaching St Maximus' work, "Four Hundred Texts on Love" (also known as "Four Centuries on Charity"), to those who attend Zion's "St Lawrence Theological Institute."

Even though he "died for orthodoxy and obedience to Rome" and "is commemorated in the Roman Martyrology on 13 August," (source) St Maximus is not familiar to many Western Christians. No doubt, this has to do with the fact that he was a defender of the Fifth Ecumenical Council and the prime theologian whose writings undergirded the Sixth Ecumenical Council. These two councils dealt with Christological controversies that arose after the famous Fourth Ecumenical Council of Chalcedon. These controversies--the monophysite and monothelite (as well as monenergism)--arose chiefly in eastern lands and so did not directly touch the western churches. In fact, it is not unfair to say that the western churches have effectively ignored, or at least grossly under-studied, the controversies leading to and decisions resulting from the Fifth & Sixth Ecumenical Councils. (Here is a brief overview.)

In the last half-century, however, interest in the writings of St Maximos the Confessor has picked up among western Christians. Two Roman Catholic theologians whose scholarship gave rise to this study were Dom Polycarp Sherwood and Hans Urs von Balthasar (who thoughts have profoundly influenced Pope Benedict XVI).

St Maximos the Confessor was a righteous man, courageously speaking against bishops and patriarchs who harbored schismatics or heretics, or who themselves sided against the Council of Chalcedon. When he was seventy, St Maximos assisted Pope Martin during the Lateran Council (649 AD; a local council) which the pope had convened to condemn the patriarch of Constantinople of monothelitism. (Monothelitism teaches that Christ had only one [divine] will, thereby denying his full humanity.) Pope Saint Martin I was later dragged from Rome and died in exile as the last martyred pope.

The extremities of the earth, and all in every part of it who purely and rightly confess the Lord look directly towards the most holy Roman Church and its confession and faith, as it were to a sun of unfailing light, awaiting from it the bright radiance of the sacred dogmas of our Fathers according to what the six inspired and holy councils have purely and piously decreed, declaring most expressly the symbol of faith. For from the coming down of the incarnate Word amongst us, all the Churches in every part of the world have held that greatest Church alone as their base and foundation, seeing that according to the promise of Christ our Saviour, the gates of hell do never prevail against it, that it has the keys of a right confession and faith in Him, that it opens the true and only religion to such as approach with piety, and shuts up and locks every heretical mouth that speaks injustice against the Most High. (source)

Like the Roman pope, St Maximos also suffered a martyr's death. Because of his efforts at the Lateran Council, St Maximos was arrested and tried several times and exiled. Finally, 13 years after the conclusion of the Lateran Council, because he was aligned with Pope St Martin I and would not recant, St Maximos was put on trial in Constantinople. During the trial, Pope St Martin I was posthumously anathematized and St Maximos was sentenced to exile. But before being exile, the right hand and tongue of this 82 year-old man were amputated so that he could not longer write or preach. He died shortly after he arrived in exile. (Sherwood, 27-28)
Posted by Fr John W Fenton at Monday, May 22, 2006 No comments: Links to this post

...I have returned to the blogosphere. I was absent for various reasons, mostly having to do with parish duties and educational obligations (i.e., learning and teaching).

With my return, I've decided (for the time being and, again, for various reasons) to suspend the ability for readers to comment on this blog. I still appreciate whatever comments may be made--most of which prove helpful or stimulating to my thinking. So feel free to comment to me personally by sending me a direct email. Feel free to use this address: stjohnofkronstadt@gmail.com.
Posted by Fr John W Fenton at Monday, May 22, 2006 No comments: Links to this post