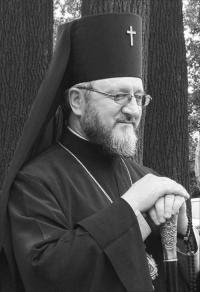 It is not widely reported that the plane which crashed in Russia carrying the President and other leaders of the Polish government also had a religious delegation. Among those killed was Archbishop Miron, Bishop of Hajnówka of the Polish Orthodox Church.

May his memory be eternal!

The Pomp of the Devil

Most regrettably, modern translations of the ancient Western baptismal liturgy have danced around or re-translated or ignored the key word in the third renunciation. After asking the candidate if he renounces Satan (abrenuntias Satanae) and all his works (et omnibus operibus eius), the candidate is then asked if he likewise renounces all of Satan's pomp (et omnibus pompis eius).

It is that little word pomp (pompis) over which many stumble or fumble, no doubt because it is an uncommon English word. Some would, I'm assure, assign it to the trash heap of "archaic," even while insisting that "Pomp and Circumstance" remain in the graduation tradition. (As an aside, isn't it curious that what no longer is acceptable in liturgy because it is out of date and doesn't speak to us, is perfectly acceptable in other contexts?) Others would argue, a little more persuasively to my mind, that "pomp" does not translate, but transliterates, pompis. Or does it? Perhaps such a "cold" Latinate word is "warmer" and communicates better than an Anglo-based equivalent (if there truly is such a thing). But I digress.

As you can tell, I am all for keeping the older translations while, at the same time, insisting that helpful explanations be provided. That is, after all, the role of catechesis--not to instruct by means of a translation, but to teach what a translated word means.

As an aid toward such in regard to the little word "pomp," I offer the following which is unhesitatingly copied from Pope Benedict XVI's Easter Vigil Homily 2010. I hope you find it as helpful as I do.

The strange word “pomp”, that is to say the devil’s glamour, referred to the splendour of the ancient cult of the gods and of the ancient theatre, in which it was considered entertaining to watch people being torn limb from limb by wild beasts. What was being renounced by this “no” was a type of culture that ensnared man in the adoration of power, in the world of greed, in lies, in cruelty. It was an act of liberation from the imposition of a form of life that was presented as pleasure and yet hastened the destruction of all that was best in man. This renunciation – albeit in less dramatic form – remains an essential part of baptism today. We remove the “old garments”, which we cannot wear in God’s presence. Or better put: we begin to remove them. This renunciation is actually a promise in which we hold out our hand to Christ, so that he may guide us and reclothe us. What these “garments” are that we take off, what the promise is that we make, becomes clear when we see in the fifth chapter of the Letter to the Galatians what Paul calls “works of the flesh” – a term that refers precisely to the old garments that we remove. Paul designates them thus: “fornication, impurity, licentiousness, idolatry, sorcery, enmity, strife, jealousy, anger, selfishness, dissension, party spirit, envy, drunkenness, carousing and the like” (Gal 5:19ff.). These are the garments that we remove: the garments of death.