In his Retractationes (Retractions), St Augustine has demonstrated that one of the marks of humility is the willingness to critically self-evaluate one’s writing and then make needed corrections. In some cases, this may lead to the arduous work of a thorough-going revision. 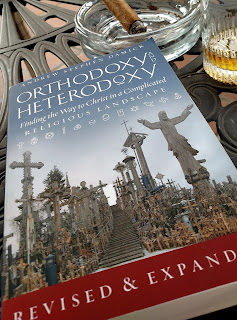 This Augustinian-like humility is displayed in Fr Andrew Damick’s revised and expanded edition of Orthodoxy and Heterodoxy. The revision was necessary not only because the original scope of the book had changed, but also because he realized that the picture he drew of other Christian denominations was unrecognizable to them.

I was among those underwhelmed with the first edition. The Lutheranism he depicted was too simplistic and flat; and the Roman Catholicism was heavy on tired caricatures.

St Augustine set out to make corrections because he knew that, over time, his faith had deepened and his charity lengthened. Fr Andrew made his revision because he wanted to avoid the all too easy comparison of misrepresentation with reality, of popular religion with official dogma.

I am convinced that this edition far exceeds the previous, and accomplishes all that Fr Andrew desired. In fact, it is a book that I recommend to Orthodox and non-Orthodox alike, and will incorporate in parish instruction.

Fr Andrew offers a survey of main ideas rather than an in-depth analysis. His book is not laden with theological jargon, and does not require the reader to unpack heady concepts. His style, instead, is to speak to the Christian who has a fair to good understanding of his faith. He is neither pedantic nor condescending. In fact, he occasionally slips into contemporary or even hip language. This is not distracting but, in its limited use, somewhat charming.

I recommend this book primarily because it is an easy-to-read and balanced presentation, without falling into a kind of false objectivity where the author pretends not to take sides. Fr Andrew is clear and forthright in taking sides. He is comparing other Christians and non-Christians with Orthodoxy. It is apparent that he wants to be very careful in presenting the teachings of the other faiths. At the same time he is consistent with the Orthodox faith.

His tone is neither polemical nor condescending, but kind and humble. “Here are the similarities and differences,” I can hear him say. “And here is where the Orthodox Church stands. And so now we can begin to compare apples with apples.”