My statement of resignation generated some interest and, subsequently, has led to a radio interview which will be broadcast on Saturday and available via the internet.
Posted by Fr John W Fenton at Tuesday, November 28, 2006 No comments:

The Feast of the *Other* Presentation

I find it rather intriguing that the Western churches have never really celebrated The Presentation of the Blessed Virgin Mary with the same earnestness as they celebrate the other Marian feasts. The feast appears in the pre-Vatican II calendar as a Greater Double (or Feast of the Third Class) and in the post-Vatican II calendar as a Memorial. These are not very high rankings, especially when compared to the Conception, Dormition and Nativity. (Even the short-lived "Motherhood of the BVM" enjoyed a higher rank.)

I find this fact rather intriguing because the Eastern churches have always ranked this feast among the Twelve Great Feasts. The details are drawn from the Protoevangelium of St James, which states that when the blessed child was three years old she was brought by her parents, Joachiam and Anna, to the temple to live there as a temple virgin until she was betrothed to a widower named Joseph.

Of course, this story should not be considered on the same level as Holy Scripture. Nevertheless, this feast teaches us an important detail, which may be summarized this way:

In all of Scripture, the word "temple" is most often used to refer only to two things: the place where the Ark of the Covenant (which contained the Lord's Word) is stored, and the sanctified person who is "the temple of the Holy Ghost" The bridge between these two uses of the word is the Blessed Virgin Mary. At least, that is how the early church fathers thought. They saw the Blessed Virgin in the Old Testament descriptions of the Ark and, by extention, of the Temple. And so it was not a novel or radical leap, but clealry within the interpretive matrix of the church, when St. Paul said that we are temples of the Holy Spirit. For he was stating that, just as the Blessed Virgin held within her womb the very Word of God, so we also (like her and, in fact, because of her) can hold within our hearts and our very beings, that same Word of God.

This point is underscored by the Gospel reading which is commonly read in both the Eastern and Western churches on this feast; particularly the words, "Blessed are they who hear the Word of God and keep it."
Posted by Fr John W Fenton at Monday, November 20, 2006 1 comment:

The Byzantine Nativity Fast began last Wednesday (15 Nov); the Nativity Fast for Western Rite Christians begins on Advent Sunday (3 Dec). Like all fasts, the Nativity fast is designed "given for us to grow, not to crush us." So states Fr Matthew Jackson in an instructive post on fasting.

I concur with the good priest's analysis that this is the heart of the matter:

The purpose of fasting is to gain mastery over oneself and to conquer the passions of the flesh. We don’t fast because it pleases God if His children don’t eat, "the devil never eats" (Lenten Triodion). We don’t fast in order to afflict ourselves with suffering and pain, that doesn’t make God happy. Neither do we fast with the idea that our hunger and thirst can somehow serve as a "reparation" for our sins. This understanding is never given in the Scriptures or the writings of the Saints which claim that there is no "reparation" for man's sin but the crucifixion of Christ. Salvation is a "free gift of God" which no "works" of man can accomplish or merit. We fast, therefore, and must fast, only to be delivered from carnal passions, to be delivered from our bondage to sin and to our own desires. We fast to make ourselves receptive to the operation of grace in our lives. So that we can become the dwelling place of the Holy Spirit.

I commend to you the entire message.
Posted by Fr John W Fenton at Saturday, November 18, 2006 5 comments:

No longer available at an earlier advertized link, Chris Orr makes it available here. You can also find it in pdf format here.
Posted by Fr John W Fenton at Wednesday, November 15, 2006 No comments:

Packing and unpacking a fairly large library is a pain. The benefit, however, is that one is re-discovers books that were forgotten, hidden, or designated for "later reading." One such book that I recently re-discovered is The Haily Mary: A Verbal Icon of Mary by Nicholas Ayo, CSC (University of Notre Dame Press, 1994).

When I should have been doing other things, I picked up the book to re-familiarize myself with its contents. Then, of course, I became engrossed. And then I discovered this little gem which reconfirmed what I had read elsewhere.

Petitionary prayer to Mary characteristic of the second part of the Ave Maria can be found in a fragmentary way very early in the liturgical practice of the church of Alexandria. In a subterranean sanctuary dating from third-century Alexandria there is a fresco depicting the marriage at Cana with an inscription to "Holy Mary" (Haghia Maria). The Sub Tuum Praesidium is the oldest Marian prayer, cherished in the liturgy both of the East and the West. It is remarkable because of its appeal to the intercession of Mary. The Greek text was discovered in the twentieth century on a fragment of papyrus estimated to date from the third century.*

We seek refuge under your protection,
Holy mother of God;
Do not turn away our prayers in our need,
But always deliver us from all danger,
O glorious and blessed Virgin.


*The original text in Greek is a fragmentary piece of papyrus, and some reconstruction was required to present a coherent text for publication. Various liturgies, both East and West, have further adapted the text of this prayer to their particular devotional situation. There is thus no one standard Greek text to which everyone subscribes. For an exhaustive treatment of the "Sub Tuum," see Giamberardini, Il Culto Mariano in Egitto, I:69-97 and 273.

Do you have a favorite quote from literature? I have several, and this one from the pen of Fyodor Dostoevsky is by far my favorite.

Fear nothing and never be afraid; and don't fret. If only your penitence fail not, God will forgive all. There is no sin, and there can be no sin on all the earth, which the Lord will not forgive to the truly repentant! Man cannot commit a sin so great as to exhaust the infinite love of God. Can there be a sin which could exceed the love of God? Think only of repentance, continual repentance, but dismiss fear altogether. Believe that God loves you as you cannot conceive; that He loves you with your sin, in your sin. It has been said of old that over one repentant sinner there is more joy in heaven than over ten righteous men. Go, and fear not. Be not bitter against men. Be not angry if you are wronged. Forgive the dead man in your heart what wrong he did you. Be reconciled with him in truth. If you are penitent, you love. And if you love you are of God. All things are atoned for, all things are saved by love. If I, a sinner, even as you are, am tender with you and have pity on you, how much more will God. Love is such a priceless treasure that you can redeem the whole world by it, and expiate not only your own sins but the sins of others. (Brothers Karamazov, Bk II, Chapter III; Source)

Instead of tagging folks, I'll just wait for others to jump in. All I ask is that you link to this post so that those who visit here can then easily go to your blog.
Posted by Fr John W Fenton at Wednesday, November 08, 2006 3 comments: 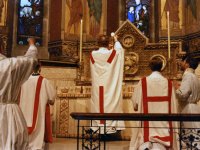 [A] common turning to the East during the Eucharistic Prayer remains essential. This is not a case of accidentals, but of essentials. Looking at the priest has no importance. What matters is looking together at the Lord. It is not now a question of dialogue, but of common worship, of setting off towards the One who is to come. What corresponds with the reality of what is happening is not the closed circle, but the common movement forward expressed in a common direction for prayer....

In this way we obey the ancient call to prayer: Conversi ad Dominum, "Turn to the Lord!" In this way we look together at the One whose Death tore the veil of the Temple -- the One who stands before the Father for us and encloses us in His arms in order to make us the new and living Temple.