Favorite Quote of the Year 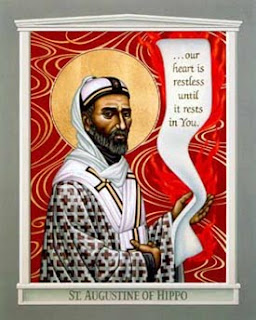 "St Augustine was a saint in the Orthodox Church until the 1960s."

Now, I'm aware that this statement was most likely not first uttered in 2009; however, that's when I first heard it. I'm equally aware that it may not be original with the person from whom I heard it; hence, no attribution.

Given those caveats, the truth contained within it captivates my imagination.
Posted by Fr John W Fenton at Wednesday, December 30, 2009 7 comments:

Yesterday (Saturday), I had the joy of administering the Sacrament of Holy Chrismation to four of my spiritual children. It is always a joy to welcome into the fullness of the Church those who have struggled and sacrificed to buy the field and acquire the pearl of great price. As Fr Anthony said, their faith confirms, encourages and strengthens the faith of all.

After the Chrismation, I also had the joy of serving the Divine Liturgy with two brother priests: Fr Anthony Michaels and Fr Gregory Hogg. It is always good to live Psalm 132. For that is how, I think, that Psalm must be read; namely, that brothers dwell together in unity most clearly when they stand in God's presence offering Him thanks by participating in the Holy Sacrifice.

Yet a third joy was meeting two dear women who have encouraged me more than they can imagine. I have known these two for several years, but only "pixelly." Yet now I can put an endearing and enduring smile to Anastasia and Rose.

As an added bonus, I was blessed to see the new temple (still in progress) for St John Chrysostom parish in Fort Wayne. I remember well the old temple, and am pleased that the parish will have a gorgeous place for gathering both to pray and to fellowship. I hope to be able to attend once again when the temple is finished and consecrated.
Posted by Fr John W Fenton at Sunday, December 20, 2009 1 comment:

Why Children Don't Get Their Father

This week I had more than one occasion to give the following pastoral counsel.

Children don't always get why their father does what he does; why he disciplines them now but not then; why his discipline is this kind rather than that kind; why he seems so hard and mean and angry when he says he loves them.

To be sure, with human families fathers are often capricious and act out of frustration or anger rather than true love. But that is not always the case. Often a father's discipline or strictness is based on a genuine love for the children. Yet even then, children don't get their father and the direction he is leading them to. And that's because children are children. They don't see (and don't want to see) how the father's discipline, words, etc are for a greater, long-term good--or a good that won't kick in until much later.

Now, if this is how it is with earthly children and earthly fathers, how much more do we, the children of God, not get our heavenly Father, whose "thoughts are not ours thoughts, nor His was our ways."

Certainly, we cannot and do not want to see the big picture. And certainly, we see discipline as punishment; and we see bad things happening as God's anger.

There is a clear distinction between discipline and punishment. And one of the simplest ways to see this distinction is to remember this:

God doesn't punish. He disciplines. In other words, what He does (that we don't like, get, understand or that seems harsh and mean) is His way of training and leading us in the way of salvation. It is one facet of His love.

Let me clarify: punishment happens. But God doesn't do it actively.

Instead, we are punished when God lets us have our way; when He steps back and say, "Okay, do it yourself, for you think you know best." And then we tend to blame God for what we, really, are doing to ourselves. (This is what St Paul means when he writes that "God gave them over to a debased mind." Rom 1.28)
Posted by Fr John W Fenton at Saturday, December 12, 2009 No comments: