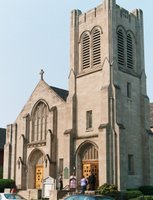 Dn Leonard Klein's statement, which I quoted below, together with the ensuing comments to my post--particularly those which rightly see that the key issue is ecclesiology--have brought to mind this statement from a presentation given in November 2004 by Walter Cardinal Kasper:

I disagree profoundly with Kasper's and Neuhaus's remarks, and am frankly astounded by them.

One would think that Fr Neuhaus would know confessional Lutheranism better than to say that we do not claim or desire to be Church. In his famous essay How I Became the Catholic I Was, he made much of Lutherans' understanding of themselves as "ecclesial Christians":

For him to have written of Lutheranism in these terms, but now to say that we do not claim or desire to be Church, is quite disappointing.

Although we do not make an explicit claim to be "the one true Church" in the same terms that the Catholic Church does, a similar claim is implicit in our attitude towards, and relations with, other Christian bodies. Altar and pulpit fellowship is extended only to those congregations and synods who subscribe to our doctrinal standards. And what is that refusal of fellowship, if not a refusal to recognize a Church body as an authentic and orthodox Christian Church? In our own way we are just as "exclusive" as Catholicism or Orthodoxy, in that we recognize as fully "Church" only those bodies with whom we are in full agreement in the faith.

As Lutheran Christians, we regard ourselves as the Church which Christ founded; we regard our ministry as the same sacred ministry that Christ established; we regard our ministry of Word and Sacrament as the the Church's means of grace, through which (and through which alone) the Holy Spirit works faith, unites us to Christ, communicates forgiveness of sins, and bestows on us the life and the kingdom that is to come. We cannot, of course, expect Roman Catholics to agree with those claims; but in what possible way is that "not wishing to be a church in the same way as the Catholic Church understands itself as a Church"?

I think you're overly exercised. Cd Kasper and Fr Neuhaus are not addressing historic, confessional Lutheran claims but Protestantism. (Notice, the word "Lutheran" never appears in either statement.)

To the extent that the conundrum called "Lutheranism" has devolved into or appropriated a Protestant ecclesiology, the shoe fits. However, as you suggest, Fr Neuhaus at least would, I'm sure, speak differently, or at least in a more nuanced fashion, to those Lutherans (however few they may be) who still hold to the 1580 Book of Concord's implicit and explicit ecclesiology.

Cardinal Ratzinger also makes a similar comment in his interview on Dominus Iesus.

I think the difference in ecclesiology that Ratzinger, Kasper, and Neuhaus are noting has to do with the Church as historical community in time versus the Church as event. Many contemporary Lutherans like to stress that the Church happens when the gospel is proclaimed in word and sacrament. If I recollect rightly, this is a view argued by Ebeling, for example--perhaps also Jenson in his early days. My memory on this is rusty. But Church as event is a very Lutheran way of talking about the Church.

I appreciate your distinction between "Church as historical community" and "Church as event" and, on the whole, I would agree.

I would also agree that ecclesiology in the 1580 Book of Concord is described primarily as event; and that today's manifestation of "Lutheranism" (especially LCMS) has bought into this not primarily but exclusively. I'm not sure other Lutherans--like the Latvians--would do so.

Regardless, I believe a case can be made from the Augustana particularly (and, less so from the other documents) that the confessors are implicitly working with a definition of Church-as-historical-community, and that their Church-as-event language must be read within that context. One primary source for such a context, I would suggest, is AC XVIII (about Bishops) where the confessors assume an historic understanding of the place and role of Bishops in an historical community; an understanding, I hasten to add, that has, for the most part, long since vanished in Lutheranism. Another source, I would suggest, is the positive use of (or referal to) canons in the AC.

To the extent that the conundrum called "Lutheranism" has devolved into or appropriated a Protestant ecclesiology, the shoe fits.

Sadly, you are right.

Few they may be; but it remains our public confession, for some inexplicable reason.

The question that arises from this exchange is whether the LC-MS "has devolved into or appropriated a Protestant ecclesiology." If it has -- and my "Exhibit A" is lay celebration (and my "Exhibit A+" would concern bishops, but I have gone that round with Chris before) -- then why are "Concordian Lutherans" any part of it; and in what respect is the LC-MS a more "homely house" than the ELCA?

(Off topic, I would be interested to know/learn/comprehend the extent to which the WELS and [especially] the ELS have "devolved into or appropriated a Protestant ecclesiology" by comparison with the LC-MS.)

Here (perhaps) is the answer:

Hast thou an RSS feed?

It makes reading your blog easier.

I am a dunce when it comes to these things. Heck, I'm amazed I can get pictures posted. :)

So (a) I don't know what RSS is or its advantages and (b) I surely don't know how to make it go on my blog.

However, I'm always willing to learn...

So somebody chastise me and tell me what's flawed about the "Evangelical Catholic Church" that Tighe provided a link to? I went to their website and found that it's all in concert with the Holy Catholic and Apostolic Church.

Is the problem simply that they have no churches? Why aren't congregations such as Zion Ev. Lutheran Church etc in communion with THESE guys instead of the LCMS?? Are they in "communion" fellowship with the St. Augustine's House?

Sorry to clog up your comments with such. You actually do have an RSS feed by virtue of using blogspot.

I read blogs with the site bloglines.com. It picks up RSS feeds (a way to organize and recieve lots of blogs in one program or website without having to go to each one individually.) If you do not use it, check it out. No I get no perks for referrals:>

The matter of ecclesiology is precisely why I grow more and more frustrated with "Lutheranism" by the month -- despite having been a Lutheran for over 10 years. I continue to believe (while entertaining growing doubts) that the Book of Concord is the true exposition of the Gospel. Yet I cannot find a real Church which truly confesses it -- unless one wants to define three congregations as "the true Catholic Church"!

Our own Confessions state that we do not define the Church through our "dreaming of a Platonic state" -- but I increasingly find myself able to actually locate the Evangelical Lutheran Church as she is known from her Confessions only in a book.