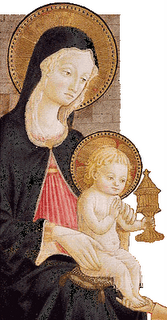 Yesterday we received an official notification from the Antiochian Orthdox Christian Archdiocese of North America that the constitution for a new parish in metropolitan Detroit had been blessed and approved by His Eminence, Metropolitan PHILIP.

His Grace, Bishop MARK, has named the parish "Holy Incarnation Antiochian Orthodox Christian Church." It will be a Western Rite parish. This means that it will follow the worship forms that were established in western churches prior to the Great Schism.

For more information about the mission, you may visit the Holy Incarnation website. You may also subscribe to the announcement list.
Posted by Fr John W Fenton at Sunday, January 21, 2007

congratulations! What a blessed day for your church family.

I noticed on your website that you specify that the Biblical studies on Sunday and Thursday are according to the Douey-Rheims text of the Bible. Are you going to use the "Challoner Revised Douey-Rheims" which borrows heavily from the King James Version or the "True" Douey-Rheims" Bible from 1582/1609 (as transcribed by Willian von Peters)?

Thanks for your question.

The primary text for our Biblical studies will be the edition of the Douay-Rheims revised by Bishop Richard Challoner. The chief reason for this is the availability and expense. To my knowledge, the 1582/1609 orginal versions in modern orthography is available only here (http://www.lulu.com/content/151358) and here (http://www.realdouayrheims.com/). I am most willing, however, to learn of other sources.

For those unfamiliar with, or interested in, this topic, this link (http://www.bible-researcher.com/links09.html) may prove helpful.

Axios! Congratulations on your ordination as an Orthodox priest and on the establishment of your mission. I met you a few years ago at the Antiochian House of Studies. You were in the Dmin program, and I was working on my St. Stephen's diploma in Theology. I am overjoyed that God has led you into the Church. May God grant you many years!